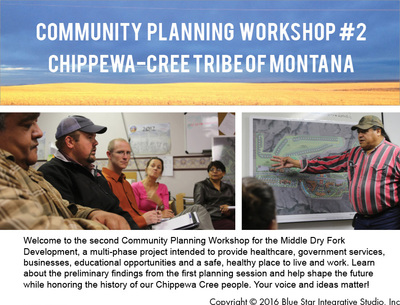 On June 17, 2010 and lasting for four days, a massive storm caused widespread flooding across the Rocky Boy’s Reservation, destroying several vital buildings, displacing residents and disrupting major infrastructure and roads. This extreme event led to FEMA support of the Chippewa Cree Tribe in its efforts to re-build in the wake of disaster. A preliminary master planning document was quickly put together in the weeks following the flooding by a non-Native planner from Florida which resulted in a master plan regarded by many locals as not reflective of their culture, way of living, or the full range of building types, goods and services that would be needed in the new community development. Thus, it became clear the planning document would need further revisions.
​
At the end of 2012 the Chippewa Cree Tribe’s Office of Planning and Development hired the A/E Team of Blue Star Studio + AOS to take the FEMA master planning document and conduct a series of community meetings to ensure the voices of tribal residents and program directors are reflected in a finalized Preliminary Engineering Report to be used in later phases of funding requests and project implementation. This work will result in updates to both the scope and budget of the development that are more in line with the wants and needs of local residents and governance structure. It includes mixed-income housing, community facilities, tribal program offices, schools, cultural buildings, commercial centers and supportive facilities for youth, families and elders.
(918) 359-5641
320 S. Boston Ave. Suite 1710 Tulsa, OK 74103
Copyright © 2021 Blue Star Integrative Studio