A SUSTAINED DEVELOPMENT FOR THE STANDING ROCK SIOUX TRIBE 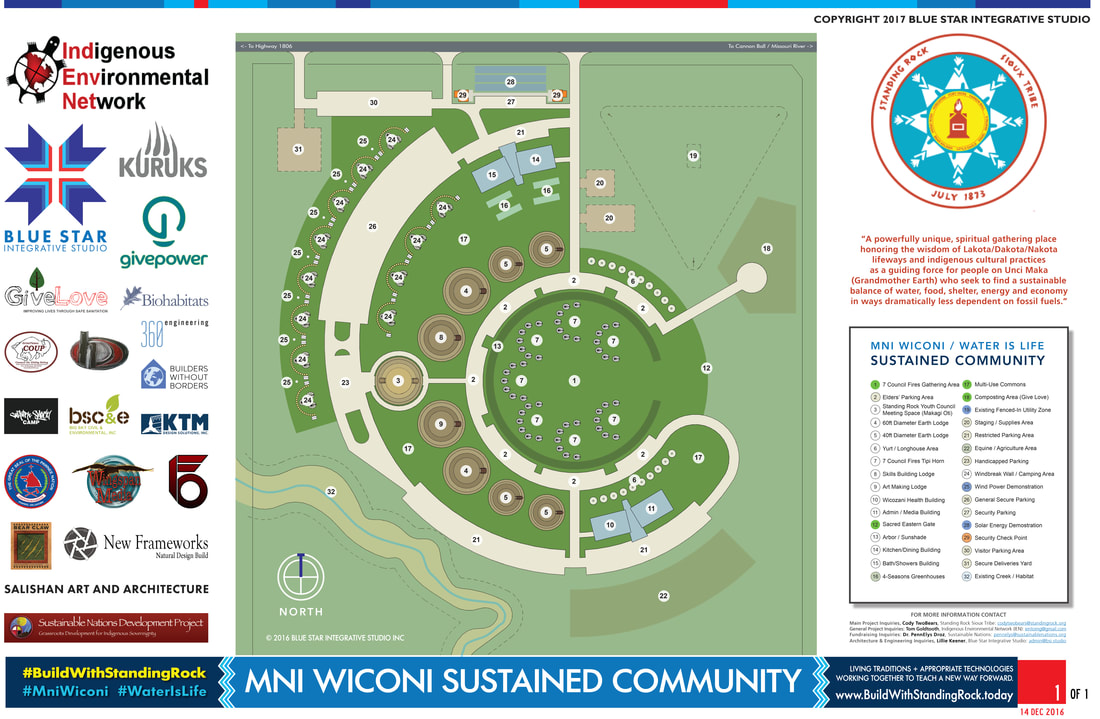 The Mni Wiconi Sustained Community is a new model, climate adaptive community that will be a sacred gathering place for generations to come. There are green-built structures to serve as permanent, solar-powered, water conserving, teaching and demonstration buildings; beautiful examples of contemporary Indigenous architecture and engineering. This is a place to celebrate an economy and way of living less dependent on fossil fuels.

On October 18, 2016, the Tribal Council at Standing Rock dedicated a 50-acres of tribal trust lands in the Cannon Ball District to serve as the proving grounds for the new community, named after the Lakota phrase Mni Wiconi (“Water is Life”) by tribal leaders. The initial, short-term purpose was to provide for a new Winter Camp to house Water Protectors on lands under the jurisdiction of the Standing Rock Sioux Tribe. The longer term vision is to build off of the Tribe’s 2030 VISION to create a one-of-a-kind indigenous village to commemorate the historic actions and unity of the many tribal nations and allies who came to the aid of the Standing Rock Sioux Tribe.

The Mni Wiconi Sustained Community has been designed with traditional architecture and modern low-impact renewable energy + water/waste systems, blending local Indigenous construction techniques that have existed for thousands of years with the latest in technologies and expertise.  The project is a climate adaptive model community. Living according to the Earth’s cycles, the project is built around strong partnerships, resources, and financial support allowing for at least 7 Earth Lodges, 6 Straw Bale Buildings, 28 Tiny Homes, and 28 Warm Yurts in the early phases of this project.

This project sprung forth from the time the Standing Rock Youth carried the message of Mni Wiconi/Water is Life to Washington DC, in August of 2016,  beginning a movement that has brought together thousands of Indigenous led Water Protectors and Earth Warriors in profound ways to support the just transition to locally based and truly renewable energy sources while protecting our Water, Land, and future.
In the News
(918) 359-5641
320 S. Boston Ave. Suite 1710 Tulsa, OK 74103
Copyright © 2022 Blue Star Integrative Studio